When Lian Xue arrived in Utah from Qingdao, China, two years ago to start college, she expected to find skyscrapers. Instead, she found mountains. Salt Lake City was nothing like the America she saw in movies, but now she calls this mountain city her home.

Yet the COVID-19 pandemic — and a controversial government policy — put her future as a Westminster College student in jeopardy. On July 6, U.S. Immigration and Customs Enforcement issued an order that would have forced international students to leave the country if their school didn’t offer in-person classes.

Xue, 20, was one of more than a million international students who were left in legal limbo, too afraid to go back to their home countries out of fears they wouldn’t be allowed back into the U.S.

In the end, public outcry pushed ICE to reverse the policy eight days later. For Xue, the mere existence of this policy led her stay up multiple nights over fears of her possible deportation.

“I’m the kind of person that will make plans and do it,” the budding computer scientist said a day before the reversal. “But right now I can be kicked out tomorrow, and I will have nothing to say about it. Everything depends on what the policy will be next.”

ICE’s transfer-or-leave policy capped a rocky semester for the introverted Xue. Like many of her peers, she found herself spending more time indoors after classes went online in March. But, in a state that is 89 percent white, she faced another burden.

With coronavirus, being Asian “means a lot of anxiety,” she said.

She heard news reports of Asian Americans being assaulted for their imagined role in the spread of the pandemic. “And you’re just kind of scared.”

When she had the choice to wear a mask or go without, she says she often went without.

“In that period of time, I think I’d rather get corona than be beaten up on the street,” she said. “I just didn’t want people to look at me weirdly.”

Xue spent most of the spring and summer tucked away in an oasis: her corner room a few miles from campus. Watercolor paintings she created are pinned to a bulletin board, next to her online class schedule and photo-booth portraits with friends. Her guitar leans against the wall, though she insists she can’t really play. BaseCase, her betta fish, swims grumpily in his small tank.

The centerpiece of her room is her computer, featuring a desktop she built from scratch.

“I really like web designing and developing, and that’s my biggest passion,” she said. “If I code, I am happy.”

Her ultimate goal is to have a career in the U.S., perhaps with a major tech company like Amazon or Google. She recognizes it’s a difficult path, compounded by the coronavirus and rising international tensions between China and the U.S. Yet she sees the reversal of ICE’s transfer-or-leave policy as a silver lining.

“All kinds of things make me feel like I don’t really belong to America,” she said. “But the policy recall is definitely a big step to make us more involved in this country.”

Harvard and MIT filed a federal lawsuit against the ICE policy, which Westminster, Xue’s school, supported in an amicus brief.

“From the student perspective, it’s really important that they see their university make a public stance in support of them,” said Alison Vazquez, who oversees international student services at Westminster College.

Vazquez says the reversal of the policy was a “good day” for international students.

“It’s not the end, and it doesn’t solve the issues surrounding the pandemic and how it’s affected international students,” Vazquez acknowledged. “But it’s a positive step forward for sure.”

As for Xue, she’s grateful for her university’s contribution.

“Even though there’s always people who have opinions towards us, there’s another group of people that stand by our side and fight for us, and I can’t appreciate it enough,” she said. “I believe that if we’re confident enough and we keep calling society for action, there’s actually ways that we can change something in the future.” 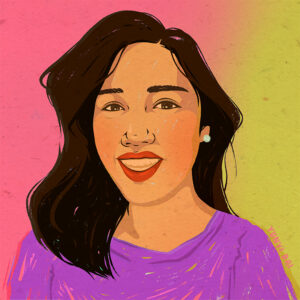 Originally from Boise, Idaho, Diana Khosrovi is a news and storytelling fan. She recently graduated with a B.S. in public health from Westminster College and is an events and community engagement editor at KUER in Salt Lake City. She plans to use the journalistic skills she learned from NextGenRadio to tell compelling news features on social justice, health and disenfranchised communities.