At five years old, Atem Aleu fled civil war in his native Sudan, eventually ending up in Utah in the early 2000s, searching for safety. And after that, in Salt Lake City. He still lives in Salt Lake City with his wife and five children, where he juggles being a father and artist, working two jobs, and navigating what it means to be a Black refugee in the midst of a racial revolution.

In the mid-1980s, Aleu lost his parents, younger brother and home. He tried to escape the intensifying fighting between government-backed forces in the north and south of Sudan. He ended up becoming one of tens of thousands of orphaned and displaced children known as the Lost Boys of Sudan.

Aleu fled to Ethiopia only to find himself targeted by Ethiopian rebels, allies of the Sudanese government he thought he had left behind.

“The government start sending helicopter to come bomb us at the border,” Aleu, 40, said.

Aleu was 12 years old when he made it to the Kakuma refugee camp in Kenya, where he lived for nine years. While living in the refugee camp, he used the long stretches of time there to process the deaths of other child refugees, and the executions of some of his family members, he had seen during his escape. Leftover charcoal helped him express his feelings in illustration.

“I made some kind of therapy for the trauma I had,” Aleu said. “I taught myself art.”

Aleu graduated from Brigham Young University in 2007 with a bachelor’s degree in fine arts. He draws from the painful memories of his childhood to create paintings, pastel illustrations and sculpture.

He says that one year ago, the National Museum of African American History and Culture in Washington, D.C., contacted him expressing interest in exhibiting some of his artwork. He hopes to use that opportunity to share the story of the Lost Boys with museumgoers.

“My artwork is from memory,” Aleu said. “It is from my own experience, what I see in my country, the suffering of the people. It’s to educate people [about Sudan] so that people learn through that artwork.”

Aleu has found many ways to help others. He works as an advocate for refugees, helping them integrate into life in Utah. He has a second job as a part-time crew member at Trader Joe’s so he can send money back to Sudan.

“We still have people who depend on us,” Aleu said. “South Sudan is not stable, so we have to work hard so that we can accommodate our own life here and their life back home.”

His five children, all under the age of 13, also depend on him. Parenting has its own challenges, Aleu said, but teaching his children how to navigate racism is a hurdle he did not expect to face in the U.S.

“I worry for my kids,” Aleu said as he reflected on the events that brought the Black Lives Matter movement to prominence. “When we see something happen to African American, it feel like it happen to us.”

“Back home [in Sudan], they think that America is only a good place…but with all these thing happen, sometime people have a step back and say, ‘Is this the country that I want to go to?’”

As a former Lost Boy, refugee and Black man living in America, Aleu worries about the safety of his children.

“It brings fear into my heart,” Aleu said. “[My kids] fall into the same categories like African American people.”

On a recent afternoon, Aleu pulled out a piece of paper, opened a box of pastels and began to draw a sketch of the home where he was born. As he drew, he became more relaxed, as if each stroke of the pastel was a deep, meditative breath.

“In 1999 the United Nations asked me to draw some pictures for the migration attorneys who were going there to interview Lost Boys,” Aleu said. “And then they gave me art material that I was using to draw all the thing that happened during the struggling…to help migration attorneys understanding our situation as refugees.”

Aleu’s art has helped him stay connected to where he came from and share his story in the hopes of preventing wars like the one who escaped in Sudan.

“My main goal and my main dream is to be a peacemaker,” he said. 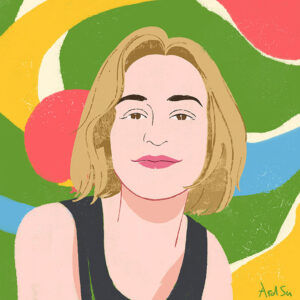 Kaya Hartley is a student at the University of Utah with a passion for information accessibility, empathy through education, and quality ice cream. She has covered topics ranging from the struggles of LGBTQI+ people living in refugee camps to race-related issues, social equity, community outreach and underserved populations. She aspires to be a freelance journalist with dreams of never being stuck in one place for too long.